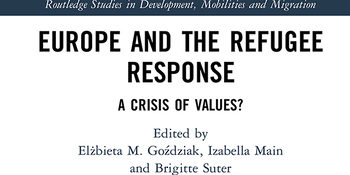 Europe and the Refugee Response A Crisis of Values?

This book explores how the rising numbers of refugees entering Europe from 2015 onwards played into fears of cultural, religious, and ethnic differences across the continent. The migrant, or refugee crisis, prompted fierce debate about European norms and values, with some commentators questioning whether mostly Muslim refugees would be able to adhere to these values, and be able to integrate into a predominantly Christian European society. In this volume, philosophers, legal scholars, anthropologists and sociologists, analyze some of these debates and discuss practical strategies to reconcile the values that underpin the European project with multiculturalism and religious pluralism, whilst at the same time safeguarding the rights of refugees to seek asylum.

Country case studies in the book are drawn from France, Germany, Greece, Hungary, Italy, the Netherlands, Poland, Spain, Sweden, and the United Kingdom; representing states with long histories of immigration, countries with a more recent refugee arrivals, and countries that want to keep refugees at bay and refuse to admit even the smallest number of asylum seekers. Contributors in the book explore the roles which national and local governments, civil society, and community leaders play in these debates and practices, and ask what strategies are being used to educate refugees about European values, and to facilitate their integration.

At a time when debates on refugees and European norms continue to rage, this book provides an important interdisciplinary analysis which will be of interest to European policy makers, and researchers across the fields of migration, law, philosophy, anthropology, sociology, and political science.

The Open Access version of this book, available at https://www.taylorfrancis.com/books/e/9780429279317, has been made available under a Creative Commons Attribution-Non Commercial-No Derivatives 4.0 license